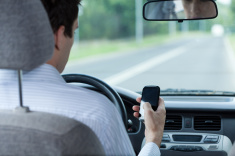 From the time Pokémon Go, a mobile gaming app that enables players to catch virtual creatures, was released, the world went crazy and the smartphone revolution has begun. In the game, players walk around in their area, on the streets to catch Pokémon. While this may be something exciting and thrilling, it can be harmful when playing it in the wrong places. This is exactly what happened to a Pokémon Go player who got injured while trying to catch them all.

A New York driver suffered minor injuries, particularly a broken ankle and cuts to both legs, after crashing into a tree while driving and playing the app. The accident happened in Auburn, July 12. Police did not identify the driver but say that he admitted to actively playing the game while driving and that caused him to be distracted.

Even before Pokémon Go was introduced, there were already several factors that can cause driver distraction. These include use of electronic devices, grooming, talking to passengers, reaching for an object, reading, and eating.

While the nation has passed laws that prohibit drivers from texting and driving, there are still careless drivers who think they can multitask and go against the law. And now that Pokémon Go has arrived, we can only blame ourselves and not Pikachu or Squirtle for any unfortunate incident that may happen if we play and drive at the same time. Just like texting and driving, Pokémon Go and driving also don’t mix.

As a Kentucky Accident Attorney, I have always welcomed technology; but we should be careful in using it or else it may only cause us harm instead of making our lives more convenient. Pokémon Go is an interesting app and it awakens the inner child in some of us. We cannot deny the fact that the game poses some safety concerns, as players have the tendency to keep their nose buried in their phone’s screen without regard to their surroundings or to what they are doing. So, let’s be reminded to use common sense and logic when playing it.