Leaving Car To Warm Up Isn’t Only Illegal In Kentucky, It’s Bait For Thieves, Too 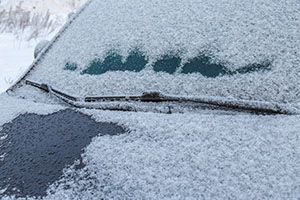 Did you know that it’s illegal to leave your car unattended as it’s warming up in Kentucky? KRS 189.430 states "No person operating or in charge of a motor vehicle shall permit it to stand unattended without first stopping the engine, locking the ignition and removing the key."​ This may seem harmless, but it turns out you can get fined or worse. In Kentucky, it’s illegal to leave a car unattended and running. This puts you at risk of theft. If you leave your vehicle unattended and running, you could be cited by the police or have your car stolen.

As per the LMPD, if your car gets stolen, there are cases where your vehicle is returned to you. However, there are unfortunate instances where the car can’t be found. Either way, a car is very important to the owner. If they lose it, it is inconvenient not just to owners, but to their family and friends as well.

Related: Tips To Avoid Sliding On Snow And Ice While Driving

Protecting yourself against car theft
According to experts, warming your car while idling may do more bad than good. Bob Aldrich of the California Energy Commission says that a car warms faster if you just drive it. Letting the car sit for an extended period of time, when it’s not in motion, is also not engine-friendly. This only results in the car engine consuming more gas than necessary, reducing mileage and performing poorly overall. A car engine shouldn’t be left idling longer than a few seconds if possible. Otherwise, it’s better to shut off the ignition altogether.

If you do warm up your car, please don’t leave it unattended. This indirectly welcomes thieves to come over and take advantage of a defenseless vehicle. Also, leaving the engine running while the car is stopped will cost you more than turning it off and restarting it.

Also, if you’re warming up your car, make sure you have your keys and double check that all windows and doors are closed. Never leave valuables inside the car in plain sight, as this will also attract thieves. Anything that can be sold, whether it’s inside or outside of the car, will likely be a target, too. Make sure you hide any valuables or take them with you.

by Michael Schafer [email protected]
Connect with me
The Personal Injury Attorney for Louisville and Kentucky
9 Comments
I live in KY and no law will stop me from warming MY own car. I had a remote start recently installed and it will not be wasted money...sorry!
by Johnny Ford November 16, 2019 at 05:42 PM
Nice try, that IRC is talking about vehicles on a highway, not your driveway.
by A.J. January 30, 2019 at 10:44 AM
For A.J. http://www.lrc.ky.gov/statutes/statute.aspx?id=6393 http://www.wave3.com/story/11532825/city-may-restrict-excessive-idling/ http://library.amlegal.com/nxt/gateway.dll/Kentucky/loukymetro/titleviitrafficcode/chapter72parkingregulations?f=templates$fn=default.htm$3.0$vid=amlegal:louisville_ky$anc=JD_72.032
by Micheal January 30, 2019 at 10:02 AM
Leaving the car running in my case has nothing to do with the car but the heat in the winter. My thought would be how is attended defined? I can have my car do my attended duties by locking the doors and observing it from a nice warm room while looking out a window. Fat chance of convincing a cop if there is an opportunity to collect a fine.
by Jim December 30, 2018 at 12:13 AM
I love how sites like this and news sites NEVER quote actual revised code to back up their claims.
by A.J. November 13, 2018 at 10:14 PM
Does this also pertain to my jobs parking lot? Once in a while the Princeton PD cruises the parking lot.
by Richard Allen November 9, 2018 at 05:05 AM
So is it illegal for cops to leave there cars run?as I have seen this numerous times.
by Caskey December 28, 2017 at 08:25 PM
Does the law regarding leaving a car running while unattended include use of a remote starter system that locks the car and causes it to turn off once a person pushes on the brake?
by Vicki Senn November 16, 2017 at 10:17 AM
Usually I never comment on blogs but your article is so convincing that I never stop myself to say something about it. You’re doing a great job ,Keep it up.
by Location de voiture April 2, 2017 at 07:06 AM
Post a Comment